This is a shout out to my hardcore husband at www.primitiveathletictraining.com and post for our clients struggling with eating-
before you read: here are some pics for you to salivate over, ladies…no I don’t mind… Even my best friends have told me that Daniel makes them feel nervous- haha! 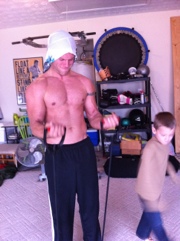 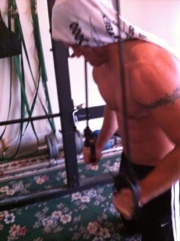 Over the years, we have trained tons of people. Many have gone on to do incredible things: dominate in special forces, run marathons, achieve huge weightloss goals, etc. The key to success in most everyone is extreme discipline : including how well they control their food intake.
& Our biggest pitfall as their trainers is our lack of ability to control the client’s diet. At the end of the day- a person will do what they want to do- regardless of what you advise them to do.
BUT we do advise them to do some things! Eventually, they realize that our way is best…
Daniel usually leads them by example. I usually crack the whip and scream at them !
Daniel’s method of “leading by example” is far more effective in the diet realm. His clients see his body, and that’s pretty much the only billboard they need. Let me tell you his not so secret tricks to his incredible body:

1.)Daniel doesn’t attach emotion to food. When he is hungry- he eats. Period. He eats a lot when he needs it, he will eat nothing all day if he doesnt.

2.)Daniel never (ever) EVER touches anything made with sugar. Let me repeat that: Daniel. Never. Ever. Touches. Anything. Made. With. Sugar. Even while at a celebration, Daniel would never do something like- say- eat a piece of cake. I think he would rather do burpees for 4 hours straight- oh wait- he’s done that.

3.)Daniel never uses artificial sweeteners. The body processes these the same way it does sugar!

4.)Daniel does not eat high sodium food or drink. Sodium causes water retention aka extra weight around your midsection.

5.)Daniel devours protein, but only in lean form. You won’t see any slabs of red meat in our house: but not because we don’t like it. It’s just too freakin expensive! (and fattening) We take in all protein via skimmilk, poultry, grains, and other plant sources.

6.)Daniel snacks often. He doesn’t “eat 6 meals a day” He just eats something based on if he’s hungry or not. If he does a high metabolic workout in the am, I’ll probably see him snacking more throughout the day.

7.)and this isn’t diet related- but Daniel only trains one way- and that’s at abnormally high intensity. Dan usually tastes his own blood when he works out. Seriously. Apparently it’s some strange phenomena of pushing your cardiovascular system so much that tiny veins burst in the esophagus I think?? Don’t ask. That’s just what I was told. I’ve only tasted iron a few times. I’m not that legit.

8.)Dan never follows a diet plan, a fad, or anything NOT backed by extremely proven research. He is a no nonsense guy!

I follow the same guidelines as Daniel. However, my guidelines go out the window with heavy endurance training. If my mileage is over 90 a week, which is pretty much ALWAYS-my sugar intake is higher for better performances in speed training, but I prefer to take these in natural ways. I eat a lot more than Dan, but that’s because I train at least 3 hours a day and usually a lot more than that. My protein intake is preferably at my body weight, but that in itself usually isn’t enough. Overall- my eating is boring. For me- making food overly exciting is like attaching emotion to food. I consider it fuel, and fuel only, instead of a way of life.

No matter what you eat- always remember burn it & earn it.
1 pound- gained or lost- is 3500 calories.

2 Replies to “What Do The Walsh’s Eat? Daniel’s rules:”