It started out looking like it was going to be an awesome day. I was finally going to get my chance to run. I didn’t get to train at all over Christmas weekend due to being really sick, so I was more than looking forward to a run. What was even more exciting was that dan has promised me a good solid 6 hours of trail time while he kept the kids for me. SO PUMPED! So I got everything together for my run, bought some fuel, and headed towards the park. Whadya know- my brakes completely went out on my POC SUV!!! OMG. I was so scared. I was determined to make it to my run though, so I BARELY made it back home to switch to the mustang & made my way to the trails!

The trail was closed due to the heavy amounts of rain we’ve had here, but I don’t have a problem running on wet and muddy trails. BUT- BURRRRRR! It was so freezing cold, with a sharp wind threatening my guts. I was NOT going to let this deter me. I bundled up in all sorts of layers, stuck my hood up, and took to the trails. 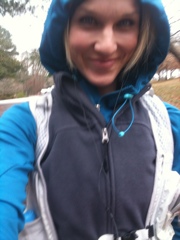 After about a mile- I started to realized that the trails were unrunnable. In all of my years running Yargo in rain, I’ve never seen them this bad!!!! I was disappointed, but decided to roll with it anyway. I ran about 4 miles and it took me almost 50 minutes. I normally hit the 4 mile marker in under 35 minutes. I was feeling worked though from trying to make my way through the raging river of yargo. GRRR! Not liking this at all! *pout* 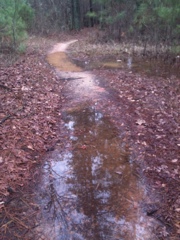 And then it started raining..HARD…AND my iPhone broke!!!!!  and guess what I see—- the most random freaking thing EVER while running yargo- a smiley face balloon hanging upside down to its death on a tree. What the heck? Really? I mean- how appropriate- Running in the rain, in December, on trails covered in rushing water & mud.. while I’m hacking up a lung from my weekend sickness with a broken iphone & a freaking smiley face is staring me down? That’s not cool. It actually made me REALLY mad. I almost went over to the stupid thing and punched it until it popped, but then I thought better of it… (because how embarrassing would it be if someone stumbled upon me taking out my aggression on a smiley face balloon?.. whatev)

So moving on- I’m still trying to work my way through this pointless run just because I’m so dead set on getting in some daggum long mileage & the ranger drives by. I don’t know if it’s some kind of park law to not run on the bike trails while they’re closed, but dude stopped his truck and stared me down until I made my exit onto the pavement-while rolling my eyes all dramatically like a bratty 13 yr old girl. “Whatever, dad!” Grrrr. So now I was even more mad- you know why? because I REFUSED to get on these stupid paved roads at Yargo this year. I won’t even bother explaining that, but just know- I DO NOT RUN THE PAVEMENT AT YARGO, and today I was forced to.. momentarily….

& then came the cherry on top…. After the ranger was well out of sight, I jumped back into the woods and found my way back to the single track, and it wasn’t but a mile into it that I hear this loud crack over my head. I look up and BAM right next to me falls this ginormous tree. LITERALLY. RIGHT. NEXT. TO. ME…. I mean- had my iPod not broke a few minutes earlier, I very well could have been DEAD. 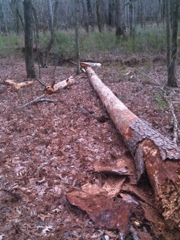 Yup, nearly getting killed by a tree freaked me out enough to finally get me off the trails. I sprinted back to my car in the cold rain. Sat down, and just cried like a little baby girl for a few minutes… then I punched the steering wheel a couple of times, then I considered punching the glass out of the window and thought better of it, and then I drove my pathetic emotional self home… and now I’m wrapped up in a blanket-mad at the world and typing all about it! I just wanted to run my ultra miles 😦

THE END! LOL! Sorry you read this!