You know, after that impromptu century, I never really thought I could destroy my body via bike more than I already had. I was wrong……

Let’s start with the beginning.

If you’re one of my blog followers, you might remember a post I wrote not long ago about my quest for cycling legitimacy. I wrote about my need to have Daniel’s approval of skills on the mountain bike, a need for a nickname, and so on.
Since then, I have been working really hard on my biking, and I’ve actually gotten pretty good! After the century, things just started clicking with me as far as my comfort in controlling a bike. I was already getting good at tackling tough singletrack trails, and the confidence from my endurance on the road just solidified the newfound love for me!

Starting the day after the century, I began amping up my mileage on the bike. Daily I was tackling roughly 13 miles of hard twisted trails, then following it up with an hour or more of running. By Friday, I was feeling the burn.

Friday night, I got a call from my mom that she wanted to take the kids for the weekend. What?! Seriously! I couldn’t believe my luck. My mom is a busy woman and rarely has time to take my kids off of my hands, especially for an entire weekend!

Daniel and I were pumped.
“Let’s go mountain biking!” he said.

Knowing my legs were fully cooked, but excited to show off my knew confidence, I agreed to hit the trails.

We started with Harbins Park, a technical trail 8-9 miles in length. I settled in behind Daniel and BAM. Man, I wasn’t even a half mile on that stupid trail before my bike just straight up went out from under me!

“I swear I’ve never fallen here before by myself!” I shouted, “SWEAR!”

My legs were cooked, and my new set of skills were no where to be found.
The rest of the ride continued with me explaining myself, and Daniel not really buying it.

“I’m just not having a good night.”

“I trained hard all week.”

“Do you think we can just take it easy?!”

After finishing the ride, I vowed to never let the inferiority happen again.

…until we went out for the next ride in the morning and another ride in the evening! Both of which sucked major.

I suffered through another slow and painful 15 miles that day before I explained myself again.

“Daniel, I swear I don’t suck this bad all the time. I’m seriously just torn up from the week. I did a century last Saturday, ran a 3:45 marathon the weekend before that. All after sitting on my butt for almost 2 months without training one bit. I’m just tired.”

My pace??? MY PACE?!!! My pace is normally suicide pace. No this is not an accurate representation of MY PACEEEE!!!!!! I thought.

But I said, “Okay.” and smiled. And we continued on at my “happy pace” and I grinned through my frustration.

Man. I’m never going to show I’m legit. Ever! I thought on the ride home.

But forever didn’t take that long..

So a friend of mine, Chris Kostman, AdventureCORPS head honcho, is a cycling addict. What you may not know, is that AdventureCORPS is not only home to the ridiculous challenge of Badwater 135, but also the ultra hardcore cycling event : FURNACE CREEK 508. Needless to say, Chris is loads of cycling legit.
I’m not one hundred percent sure if he just felt sorry for me that I rode 100 miles a couple of weeks ago in a T shirt, or if he was just embarrassed for me, but Chris took it upon himself to extend his cycling awesomeness to the lowly likes of me…
By sending me a jersey straight from Death Valley!!!!!!! 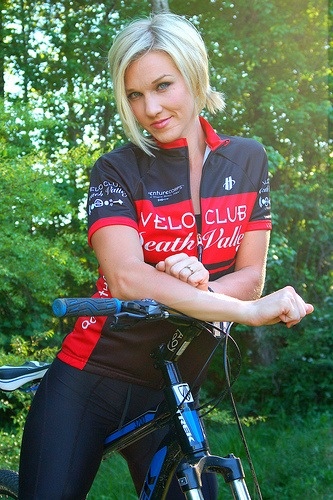 This is just too cool.

Y’all for real, this did wonders for my bruised ego. I could hardly wait to ride in my new jersey, “Okay, Dan. Listen. I’m going to rest up tonight, and then tomorrow I’m going to prove my worth. Seriously. I’m going to wear my legit jersey, too. Watch!”

He reluctantly agreed to hit the trails for the forth time with me during our kid free weekend, “Okay if you want to, that’s fine with me.”

I knew Dan didn’t believe me, but I was convinced that I would finally be recovered enough to take down some serious trails Sunday morning.

And with the morning, came my new and improved ferocious female behavior, “LET’S DO THIS!!!!” I really don’t think I’d ever been this pumped for a freakin ride around our local 12.5 mile trail! But I zipped up my new jersey, and I was ready!

I don’t know if that jersey had some magic placebo effect, or if my legs just finally felt better, but right when I hit the trail head, I knew it was my day to shine.

This time, I hopped in front of Dan, and took the lead. Daniel- the fitness extraordinaire- actually had to work and sweat hard to keep up with me! I demolished every single climb, and flew down each switch back. I was having a blast!

And everything was made even better when another couple decided to drop in and get all competitive like with me and Dan.

It started with a friendly, “On your left!” from the pair doing half the miles we were coming off the shorter inner 7 mile trail. This instantly turned into a brutal race to the finish of the trail. I was riding hard and fast, and Dan kept shouting things like, “Man your on fire today!” and “Look at you, girl! You’re crushing these hills”

Now this is where things get hairy. Remember how I started this post with the mention of pain? Well..
I was going to win at all cost, so I let completely off the breaks and started to take hairpin turns a little too fast. At first, I would sort of fish tail, but catch myself. I guess this added to my confidence, so I continued to blaze the turns.

Then came the most painful thing I could imagine happening on a bike.

On one of the trickiest hairpin turns of the trail, my bike bumped a big root, and popped straight into my poor little crotch with major MAJOR force!!!!

Daniel, not knowing the extent of my pain, was actually LAUGHING.

“You’ll be fine.” he said, “you’re a brave girl. Look how legit you look in that jersey. Go rep it!”
ARGHH. So that’s how its gonna be?

I begrudgingly hopped back on my bike, ignoring the massive amounts of intense pain. “How far ahead did that stupid couple get?” I shouted.

“I dunno, but there’s a big climb coming up. We can catch up if you push hard enough.”

Of course I can push hard enough. WATCH.

I gave the last climb absolutely everything I could muster up… And what did we do? We passed them of course! And man they looked so terribly defeated. “On your left!” I shouted triumphantly and all stuck up like. I never do that, but it was fun. Hahaha.

We made it back to the car first, where I nearly threw up from the pain. But of course I acted like it was nothing and offered up going for a run (instead of heading home to ice my crotch!). Daniel took me up on it. Man! So I had to force my way through another 5 miles of severe pain. Check the fake smile:

Yeah it was bad. I’m not gonna lie, it was real bad. TMI kind of bad, okay? I got home and grabbed an ice pack and locked myself in the bathroom for the rest of the afternoon alternating the ice and the heat of the tub…..

But later that day, I got exactly what I was searching for:
“Hey Baby, I’m proud of you. You really smoked everyone out on that ride today. Seriously. Good job. You sucked up and pushed through the pain. We need to ride again together soon.”

Yes. It sucked. It sucked so freakin bad. But man was it worth it!!

I am finally considered legit on a bike in my man’s eyes.

..and that’s all that I wanted.

————-
This post was read over 1375 times in the first day of posting.
Would love your feedback! Leave a comment!:)